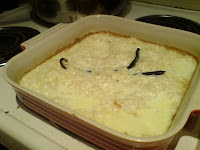 So many people turn their nose up at milk puddings. I don't know why; Jane Grigson blames it on schools' attempts at it. I must admit the rice/semolina puddings at my school were a bit of an insipid affair. However, if you think you don't like them try the Grigson version, or indeed any recipe that makes it up from scratch. You must use pudding rice with its little fat, almost spherical, grains otherwise it'll be a disaster - it stays quite grainy, whereas normal cooking rice would just become a gluey mess. Also full fat milk MUST be used. The Grigson goes all the way by using Channel Island milk.
Put 2 1/2 ounces of pudding rice in a baking dish with a pint of Channel Island milk, two tablespoons of sugar, an ounce of butter and either a cinnamon stick or a split vanilla pod. I went vanilla. (I've used extract but not a real pod before and nothing compares! Well worth investing in a couple - they can be rinsed, dried and reused several times, so don't be put off by their price). Bake in a low oven - 140 degrees Celsius - for 3 hours, stirring it every hour and topping up with more milk if it becomes too thick. When cooked, you can add more sugar to taste. Although I enjoyed it (you can't go wrong, really) I've used other recipes, and although they are all very similar in ingredients, they seem better. I shall root one out and compare later (I'm at work at the moment...).

#27 Baked Rice Pudding: 7/10. On the grand scale all milk puddings are close to perfect, but I've scaled down as I'm sure I've used better recipes...Roll on semolina pud, though!
Posted by Neil Buttery at 11:55 AM