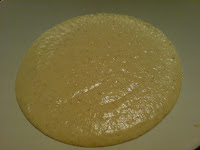 Found a couple of quince recipes. The first is (#17) Quince Cream. Seemed easy enough. In reality it was a massive ball-ache. The quince is one of my favorite fruits - I don't know why they aren't sold in more greengrocers or supermarkets. It may be that you have to cook them to eat them. They combine the best of apples and pears and go a beautiful golden-orange colour when cooked. They were used in medieval times as a jam or jelly - the word marmalade comes from the French (I think) for quince! Weird to think of our lovely English marmalade wasn't made from Seville oranges (which are Spanish). Anyway. It all seemed like it would be easy. Chop up two quinces, add a little water, and stew until soft. Push through sieve. Add cream melted butter, an appropriate spice said the Grigson, so I used cinnamon. Add sugar to taste, plus egg yolks to thicken. I took about an hour and a half to sieve the fucker! I broke one sieve in the process too. Next time I'll use one of the alternative fruit suggested.

Luckily for the Grigson it tasted nice! It was creamy but light. I'm going to have to try and reduce the amount of cream and butter in my diet though! I can feel my arteries harden as I type!
Greg says:
Quince Cream - The smell of quince is a joy and something brand new to me. This dish was lovely, another heart attack masquerading as 'fruit' but it was quite noisy during the preparation thereof, I couldn't hear The Simpsons and had to close the door while Neil scraped away at boiled fruit in the next room. Hush please! It was sloppy and fruity and rich but when I attempted to eat more the following day it had become porridge so I don't care what she says, eat it all on the day! 7/10.