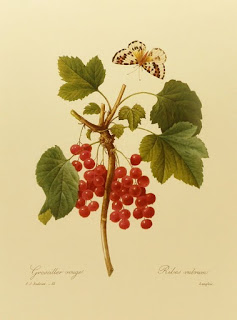 This is the last fruit jelly recipe in the book, and I’ve become somewhat of a seasoned jelly maker, making up my own recipes and these days cooking them up at The Buttery to go with meat and cheese platters, roast meats and the like. This is the second of two redcurrant jelly recipes from English Food.


Redcurrant jelly is considered a rather niche preserved, being served with rich meats such as lamb, venison and other game, or as an ingredient in Cumberland Sauce, but it is versatile; I like it with cheese.


Redcurrant jelly is very much the preserve of the gardener – the delicate berries do not transport well and have a short shelf life, which is why they are expensive to buy fresh. On a recent walk around nearby Chorlton Meadows I found dozens of sprays of ruby-red currants growing out of sight beneath a huge mass of thick brambles. Typically in these situations, I brought neither bag nor tub and so I ate them straight from the bush until acid reflux began. It was a shame really, as I could have made a huge amount of jelly. Hey-ho, I’ll remember this secret spot next year.


Our cultivated redcurrants are actually made up of three distinct species, and the less common whitecurrant is simply a variety of redcurrant that has lost the ability to produce the distinctive red pigment. There is also a pinkcurrant.


Country houses and kitchen gardens particularly in the 18th Century, grew vast amounts of red and white currants; their pectin-rich and tart juice used as a base for dozens of other preserves and sauces. I have never made whitecurrant jelly, and I wonder why one doesn’t see it anywhere?


This redcurrant jelly is enriched with red wine and contains cracked black peppercorns, I imagine it would work just as well using whitecurrants and white wine.


This recipe can be easily scaled up or down, depending on how many redcurrants you have, and the great thing about making a jelly is you don’t have to go through the rigmarole of stripping the berries from their stalks as they all get left behind during straining. 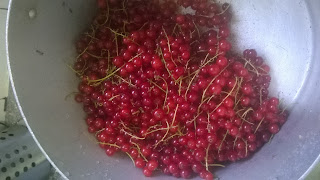 Put three pounds of redcurrants in a saucepan. To this, add around 2 ¼ pints of liquid; between 8 and 16 fluid ounces of it should be red wine, the remainder water. Bring to a boil and simmer until the currants are soft and pulpy. Pass through a jelly sieve or bag and allow to drip overnight. 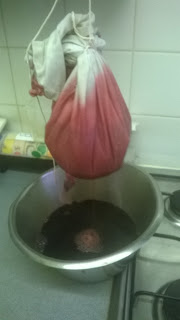 Next day, place the juice in a saucepan or preserving pan with three pounds of granulated sugar. Put over a medium heat and stir with a wooden spoon until the sugar has dissolved. Remove the spoon and turn the heat up so that the fruity syrup boils enthusiastically. At this point put a saucer in the freezer so you can test for a set later.


After 15-20 minutes boiling, test to see if the jelly has set. There are two ways: (1) use a thermometer, pectin gels set at 105⁰C; (2) the wrinkle test where a few drops of jelly on a cold saucer cool and wrinkle when you scrape them with a finger. I usually do both to be on the safe side. If the jelly isn’t set, boil for another 10 minutes and retest.


Finally, roughly grind about a teaspoon of black peppercorns using a pestle and mortar and stir in right at the end of cooking. Allow to sit for 15-20 minutes before potting in hot, sterilised jars. 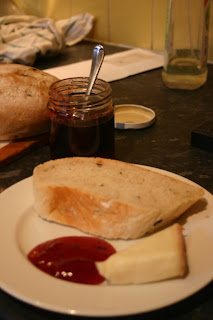 #422 Peppered Redcurrant Jelly. This is a delicious jelly, spiked with rough spicy peppercorns giving it both interesting flavour and texture. The red wine doesn’t make it too rich, as you might expect it to, so be generous with it. I am going to use it for some future lamb dishes I think, though I did try a little sample with some good cheese, butter and bread. Very good, 8/10.
Posted by Neil Buttery at 10:46 PM