#411 Brains with Curry and Grape Sauce

Brains have never really been that popular in England, often banished to a messy tray, at least that’s when they could be found at all. They’ve made appearances in other British cook books but they are few and far between.


The final nail in the coffin for the brain in British cuisine was surely the BSE or ‘Mad Cow’ crisis of the 1990s where cows were infected by a prion which causes the disease bovine spongiform encephalopathy (BSE). A prion is an infectious protein, and is therefore not alive, and cannot be denatured by regular heat-treatment. It may have been derived from the prion that causes the encephalopathy in sheep known as scrapie, but this link is unclear. 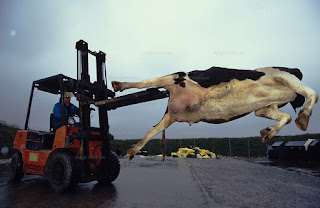 The BSE prion infects the CNS causing the brain to appear spongy under microscopic observation. The symptoms, unsurprisingly, are behavioural: infected individuals become solitary, aggressive and frenetic, they become anorexic and their milk yield drops dramatically. Eventually they lose all coordination. BSE is all-consuming, infecting not the just the CNS but the peripheral nervous system, bone, intestines, placenta and tonsils. It is also found in saliva and excrement, and can sit in the soil perfectly viable for years. I remember watching the pictures of the wretched stumbling beasts on the television news in shock and in horror as they were bulldozed into mass burning graves. A total of 4.4 million cattle were killed during the crisis. The source of the outbreak was the cattle’s feed, where ground up cadavers of sheep and cows were included in their diet. Shockingly, this practise had been going on since the 1920s, so it was just a matter of time before infection spread. In retrospect, it beggars belief that it could ever have been considered a good idea to turn herbivores into not just carnivores, but cannibals


There was of course worry that BSE could be passed onto humans, not just in food but in bovine insulin for diabetics and in bone meal for gardeners. Though bovine-human transmission was possible, there was no real initial evidence to suggest it actually occurred. Nevertheless, in 1996 the EU banned the UK from exporting beef and beef products including semen, embryos, gelatine and fat. Within the UK sales of beef plummeted, the government blaming the media storm. Secretary of State, John Gummer, famously said it was the British public and not the cows that had gone mad. Douglas Hogg, the Minister of Agriculture, was adamant that there was no link between the new variant CJD (Creutzfeldt-Jakob Disease, the equivalent disease in humans). In the Government’s desperation to calm the country and show just how safe British beef was, the Right Honourable Mr Gummer fed his little daughter a beef burger in front of TV cameras. Idiot. 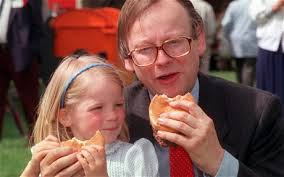 Meanwhile, the World Health Organisation had been collecting data, and reckoned that nv-CJD was probably caused by the BSE prion. Hogg and Gummer had been desperately slow to act, but now the country had to tackle the crisis swiftly.


The most important and easily implemented regulation was the ‘over 30 months rule’, a simple ban on killing cattle for beef older than 30 months. When it came to using any part of the CNS for food, the cattle must be under 12 months old, with the same rule applying to sheep. Pigs are not considered a risk.


Now with all this behind us, you can get hold of them from a good butcher. Order well in advance though, and expect to have to buy in bulk.


First of all you need to prepare your brains – you’ll need around 1 ½ pounds of calves’ brains, which I reckon to be 2 sets, or thereabouts. For some advice on preparing and poaching brains, see this previous post. For this recipe, poach them in milk, as you’ll need it to make sauce. 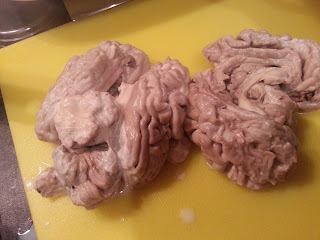 Strain the milk into a jug and slice the brains on a large plate. Keep them warm as you get on with the sauce, a cross between a béchamel and a velouté. 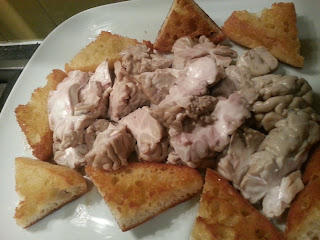 Start by melting an ounce of butter in a saucepan, then stir in a rounded tablespoon of flour and a teaspoon of curry powder. Mix all around in the butter for a couple of minutes, then add ¼ pint of hot chicken stock, adding a little at a time to prevent lumps forming, then add the amount of the milk the brains were poached in. Simmer the sauce gently for 20 minutes, stirring every now and again, then add ¼ pint of double cream. 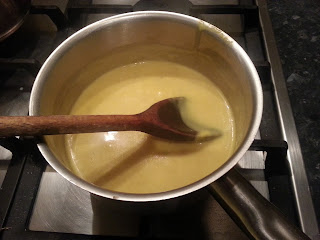 Meanwhile, get on with preparing 8 ounces of peeled grapes. To do this put them in a bowl and pour over boiling water. Let them sit for a few seconds and then strain them. The skin should now peel away with relative ease. When the sauce is ready, season with salt and pepper and tip in the grapes, including any juice. The sauce is now ready, but if it seems a little thick – it should be the thickness of double cream – add a little more stock or milk.


Pour the sauce over the brains and tuck in triangles of bread fried in butter and serve. 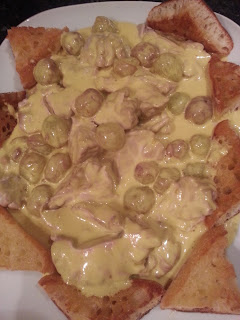 #411 Brains with Curry and Grape Sauce. Well I am glad I cooked the other brain recipe first, as this monstrosity would have put me off for life! The sauce was simply horrible; cloying in such a way, that when in the mouth, you couldn’t tell where sauce started and brain finished. The grapes simply did not go with the sauce. Obviously a thing of its time. I enjoyed the fried bread. 1/10.
Posted by Neil Buttery at 5:03 PM

Wow - that one looks truly dreadful!!

More than you can imagine. ...