Here’s a simple recipe from the Beef & Veal section of the Meat, Poultry & Game chapter. I am trying to get through all of the veal recipes before I move back to England later this year; it’s not because it is cheaper here, it’s just that it is much easier to get hold of. 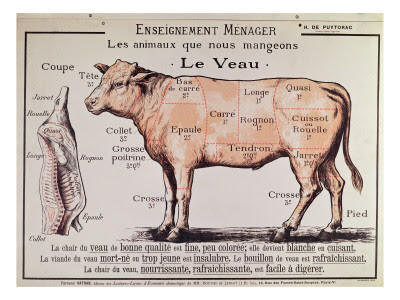 A cutlet is a chop (rib) from the best end of neck, just above the shoulders. I went for veal, though they were called ‘Tomahawk Chops’ in the shop, I don’t know that’s typical in the US or not. Anyways, it’s a very tender cut of meat that needs very little cooking, what is nicely done here is the meat is breadcrumbed so it is protected from direct heat, keeping it juicy, but with a crunch. Jane says that the thickest the cutlets should be is an inch. You need one cutlet per person (or two, or even three, if doing lamb). Jane also mentions that boned loin can be used, but the slices should be half an inch, maximum. That’s us told.
You need some breadcrumbs first: I use a blender for that job and then scatter them over a baking tray and let them dry out in a cool oven. If the bits are too big, you can always give them a very quick whizz in the blender again. Mind you don’t turn them into dust though. Take the meat out of the fridge so it can warm up to room temperature.
To the breadcrumbs add some grated lemon zest and finely-chopped herbs: parsley, thyme, marjoram and my new favourite herb, winter savory. Coat the cutlets in flour, patting off the excess, then into some beaten egg and then into the herby crumbs.
Heat some clarified butter in a heavy-based frying pan and fry gently on both sides. The amount of time depends on the thickness of the meat and how ‘done’ you want it to be. I did inch-thick cutlets, cooking them around 3 or 4 minutes a side. The crispy crumb protects the meat, so if you do accidentally cook the meat right through, it won’t be dry.
When cooked, take out the cutlets and let them rest while you get on with the job of making a sauce: on a medium heat, stir 2 teaspoons of flour into the pan juices and then whisk in ½ pint of stock – veal, lamb or chicken, it’s up to you – simmer for a little under 10 minutes to cook out the flour. Take it off the heat and then whisk in a good-sized knob of butter. Taste the sauce and add salt, pepper and lemon juice to taste. “The sauce should be well seasoned, and not too copious or thick”, says Jane. 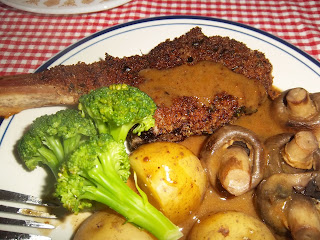 “Lemon quarters, mushrooms, watercress, a few boiled potatoes, are the right kind of setting for a meat cooked in this way”. I did the same, though I swapped watercress for broccoli. I think you always need something on your plate, perhaps that’s why she included watercress.
#340 Veal (or Lamb) Cutlets. These were great; everything was all very subtly-flavoured so the slightly piquant lemon and herbs didn’t mask the wonderfully tender veal. What else can I say? Great stuff. 8/10.
Posted by Neil Buttery at 3:42 AM