This is a piquant and rich sauce that is traditionally served with game, venison and tongue that seems very Victorian and English to me – there are many others like it such as Cumberland and venison sauce that came most likely from Germany via the kings (and a queen) of the House of Hanover (Georges I to IV, William IV and Victoria). We don’t really eat much of these sorts of sauces anymore, and we shall see if we should bring them back.
This recipe makes good use of seasonal European fruits: the morello or amarelle cherry (or sour cherry), plums and damsons. 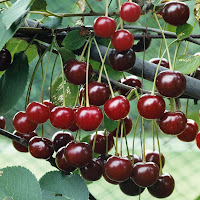 Morello and amarelle cherry trees (Prunus cerasus)are easy to cultivate, and yet it is getting increasingly difficult to find fresh British ones sold at markets, though you can find them frozen or canned pretty easily. The English cherry orchard is a feature of the country declining greatly, mainly because of the competition from cheap imported ones from the Middle East and places like that. The morello cherry was introduced in Britain by the Romans around 50AD and were very popular in Tudor times. Will the English cherry ever return? Because they are so easy to grow and take up little space I shall grow some upon my return to Britain (once I have a garden of course!).

Plums, like the cherry, are of Genus Prunus and there are around 20 species used in several different ways, the species used in Britain is P domestica which is actually a hybrid of two other species. P domestica has been bred into several varieties including my favourite, the greengage. 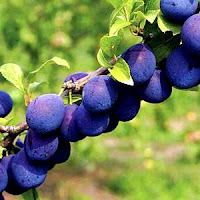 P domesticus also produced the damson, our third fruit for this recipe. Damsons to me are the most English of all three, though I have never tried them before. I shall have to rectify that.


Here is how to make the sauce, whichever Prunus you lay your hands on.

Stone 8 ounces of morello or amarelle cherries, plums or damsons. You can use canned cherries if you want, just make sure they are in water, not syrup. This is what I used. Put the fruit in a saucepan along with ¼ pint each of red wine and port, a tablespoon of sugar, 2 cloves and an inch-long piece of cinnamon. Bring to a boil and simmer for around 10 minutes until the fruit is nice and tender. If you want, you can sieve the damsons or plums if using, but I think it’s better to leave whole. Now add 2 good tablespoons of redcurrant jelly and the juice of 3 oranges and a lemon. Season with black pepper and, off the heat, stir in an ounce of butter. Taste and add more sugar if needed. 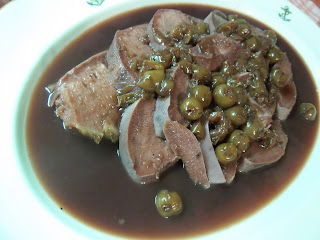 I made cherry sauce and served it with hot tongue.

#332 Cherry, Plum or Damson Sauce. I loved this sauce much more than Cumberland sauce. The rich wines and fruit were only just off-set with the sugar, fruit and spice. Very delicious, you could almost eat it on its own. We should certainly bring it back! 8.5/10.
Posted by Neil Buttery at 3:15 AM

Thanks for the tip! I will definitely try this one with damsons when they are in season later this year...