I made this syllabub to end to the little meal Hugh and I cooked for Maartin and Ninja. I’d had a feeling no one had tried one before as they have gone out of fashion rather. I’d only had one in my life before.
Syllabubs were very popular up until recently. Originally they were simply a mixture of ales or cider mixed with milk or cream, which was probably like a boozy curds-and-whey. The more solid, whipped and ever-lasting syllabubs first appeared in the seventeenth century, according to Griggers, although both were kinds were obviously eaten because recipes for both appear in the Experienced English Housekeeper by Elizabeth Raffauld from 1769 (I have recently got hold of a copy of it).
The recipe in English Food, is from a pamphlet called Syllabubs and Fruit Fools, written by the great Elizabeth David, but I thought I’d give this one from Elizabeth Raffauld too, you know, for those of you who want to keep it real. And have your own cow….
“To make a Syllabub under the cow
Put a bottle of strong beer and a pint of cider into a punch bowl, grate in a small nutmeg and sweeten it to your taste. Then milk as much milk from the cow as will make a strong froth and the ale look clear. Let it stand an hour, then strew over it a few currants well washed, picked, and plumped before the fire. Then send it to the table.”
Brilliant. Sounds awful.
Anyway, here the recipe from Ms David:
This serves four to six. Bear in mind that you have to start this one the day before you want to serve it.
To a small bowl, add 4 fluid ounces of white wine or sherry (I went with wine, as sherry seemed a bit too rich), 2 tablespoons of brandy and the pared rind and juice of a lemon. Cover the bowl and let the flavours infuse together overnight. Strain everything into a large bowl and dissolve into the liquor two ounces of caster sugar. Next slowly mix in half a pint of double cream and grate in some nutmeg. Whisk the syllabub until it almost reaches the stiff peak stage so it is still a little floppy. Don’t over-whip it. There’s nothing worse than over-whipped cream; it goes all weird and cloying. You have been warned. Spoon onto glasses or ramekins and cover with foil or cling film. Leave them somewhere cool. Sir Kenelm Digby in 1669 recommends ‘[a] tiny sprig of rosemary or a little twist of lemon peel’, so I pared some thin pieces of lemon peel and let those stand in sugar overnight too as a traditional garnish. I served them with those little caramelised biscuits you get with coffee, I forget their name. 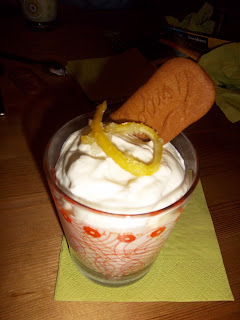 #269 Elizabeth David’s Everlasting Syllabub. Quite a boozy affair, this dessert, and I have never really got used to alcoholic puds, we just do eat them these days. However, as far as those kinds of desserts go, this was a good one, and nothing like the awfulness that was the Whim-Wham. The lemon and the fact it was a whipped dessert made it feel lighter than it was. Hugh ended up scoffing loads of them and made himself sick. Oh dear. I can’t scoff, cos I did exactly the same with the Whim-Wham. 6/10.
Posted by Neil Buttery at 3:52 PM

It looks delicious, sort of like a solid eggnog, only without the egg. I love anything that has both hard liquor and heavy cream, especially with lemon too. Maybe it would be just the thing for lab meeting!

Just to let you know that there is a new, revised, e-book edition of "Lunch with Elizabeth David". The novel involving David and her mentor, Norman Douglas, originally published by Little Brown, is available in all e-book formats and can be sampled at http://www.smashwords.com/books/view/29680
It is also in the Amazon Kindle store.

Goodbye H (Joan!). there's plenty more boozy puds where that came from so don't worry about that. I have made some biscuits that'll be coming to lab meeting tomorrow though!

Bit of a strange thing this, on the one hand really good and tasty and on the other hand the flavour felt a little pingy. It was in that strange borderland of 'I like' and 'what is this?'. The cookie made it great though. 6.8/10