Oh it HAS been a while, hasn’t it? I have been so very busy with getting ready for my move to Houston, I haven’t had the time to tell you all about the food I’ve been cooking. I have arrived in Texas now, by the way but haven’t really had much of a chance to explore the place, in fact I still have a bit of jet-lag. I shall fill you in about Houston soon, I’m sure.

Back in England it is blackberry season and those brambles that are so annoying and prickly for the rest of the year finally earn their keep. This recipe uses them, and so it was a great chance to try something that isn’t blackberry and apple pie (nice though it is). I made this in Derby visiting Simon and Rachel and the farm they are trying to set up as a cooperative eventually. They also keep bees and I used some of their delicious honey for this recipe too. If it isn’t blackberry season any soft fruit will do. 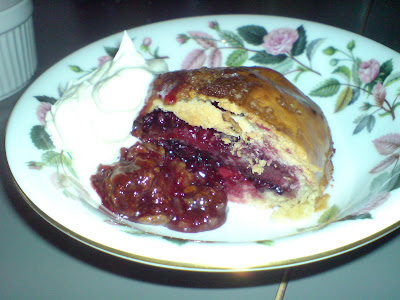 First make a shortcrust pastry with 8 ounces of flour and 4 of fat (butter, lard, or a mixture) plus cold water and roll it out into an oblong shape. Spread 4 fluid ounces of runny honey over the pastry and then sprinkle 8 ounces of blackberries over it. Roll up the dough so that it makes a sort-of Swiss roll, tucking the pastry under at the edges. Place in a small ovenproof dish and pour over 4 fluid ounces of single cream. Bake at 200⁰C for 45 minutes. Serve with thick cream.

#249 Isle of Wight Pudding. A really good pud this one, and cheap too! The best thing about it was that the juices from the berries plus the honey and cream heat up to form a delicious toffee sauce. The top goes very dark and forms a good crust, though it doesn't make the dessert look very pretty. Give it a go – quick and simple. 7/10
Posted by Neil Buttery at 2:49 AM