“And my lords and lieges, let us all to dinner, for the cockie-leekie is a-cooling.”

Cockie-Leekie, or Cock-a-Leekie, is a very Scottish dish, or so I thought. Apparently it turns up in several versions in Scottish and Welsh cook books and a rather complicated recipe in an English cook book where it is called Hindle Wakes. It appears in English food, but I haven’t done it yet.

So it is not necessarily exclusively Scottish. It is also not a soup. It’s a good, hearty and simple dish: beef, chicken, leeks and prunes all stewed together. All you need is some slow cooking time. Have a go and make it for a lazy Sunday dinner as I did. It serves at least 6 people:

Start off by placing a two-pound slice of stewing steak in the bottom of a deep stockpot. Cover with water and bring it to a boil slowly, skimming off any scum as it rises to the top. Simmer for an hour and hten season well with salt and pepper. Meanwhile trim three pounds of leeks and tie half of them in a bundle. When the hour is up place them in the pot. Simmer for a further half an hour before adding a whole chicken or capon and sit it on top of the beef (you can use a boiling fowl; if so, add it when you add the leeks). The cockie-leekie now needs to simmer gently for an hour and a half. Twenty minutes before it is ready remove the bundle of leeks and add a pound of prunes. Now slice the remaining leeks up and add those in the final five minutes. Easy. 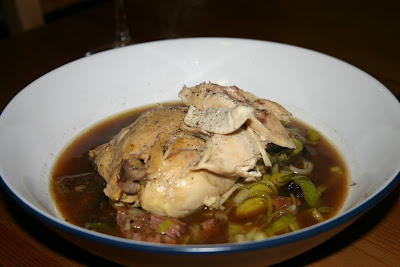 To serve it, place some beef and a piece of chicken in large bowl and cover with the thick, dark and rich stock. A meal in itself, though I did some boiled new potatoes too.

#225 Cockie-Leekie. Really good food, especially for this time of year when all is miserable and wet outside. This is home-cooking at its simplest and finest. The stock produce from the beef and prunes was lovely and rich, but did not detract from the subtly-flavoured chicken. Really good one this one. 7.5/10.
Posted by Neil Buttery at 8:40 PM