Semolina pudding is probably what most people think of when looking back at the school dinners they detested. I don’t know why people hate it so much – I love it. I almost lived off it as an undergraduate. Griggers herself detested it. It’s all very odd. Anyway, I needed a cheap pudding to go with the cheap dinner – all I had to buy was semolina and milk, everything else I had in. Scanning the recipe, I realise why Griggers liked her recipe; it’s nothing like a normal semolina pudding at all! It is for this reason that you should try it. If you normally hate it, you’ll like this version; it’s more like a soufflé. Weird.

Start by measuring out 1 ½ pints of milk, and use a little of it to mix into 2 ounces of semolina so that a paste is formed. Bring the rest of the milk, 2 tablespoons of sugar and a split vanilla pod slowly to the boil. When boiling, tip in the milk and whisk vigorously to avoid any lumps and return to the pan to simmer gently for 10 minutes. Take it off the heat and stir in two egg yolks and then fold in two stiffly beaten egg whites. Pour the whole lot into a buttered ovenproof dish (leave the vanilla pod in) and bake at 190°C for 15-20 minutes until the pudding has set and it had gone brown on top. 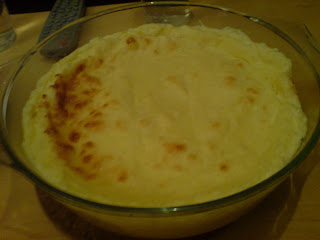 FYI: Semolina means ‘part-milled’ in Italian as it is produced from the partly ground Durum wheat the Italians use to make pasta.

#77 Baked Semolina Pudding - 5.5/10. I liked the dessert; an odd mix of traditional semolina pud and, as I said, a soufflé. The only problem I had with it, is that it wasn’t sweet enough – 2 tablespoons ain’t enough, Sister. I think I would add an extra tablespoon of sugar and sprinkle some on top too for good measure.
Posted by Neil Buttery at 4:10 PM