After the success of the Welsh Cawl last month and since it’s been fookin’ freezing of late I thought I’d try something similar - Mutton and Leek Broth. All very much in the same vein. I’ve never cooked mutton before and only eaten once or twice. Plus Grigson says it is “magnificent”. The recipe calls for scrag end of neck, which I managed to get hold of from Frost’s in Chorlton (what would I do without them?); as it’s a cheap cut this soup is really good for those on a budget: 1 ½ pounds for four quid. If you can’t get mutton, you can use lamb. Ask your butcher to chop it up for you as it’s a bit of a hack-saw job.

FYI 1: the neck of a lamb/sheep/veal calf is split into three sections: scrag end nearest the head, which is mainly bone. This is a good thing for broths as it imparts flavour to make a delicious stock. Apparently scrag end is an old fashioned term, and we say ‘round end of neck, presumably because scrag end doesn’t sound too appetising. There’s mid-neck or middle neck and best end of neck too – I’m sure I will get to them in some other recipe.

FYI 2: mutton applies to sheep that have more than two permanent incisors in wear, usually over ayear old. 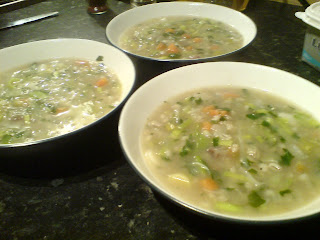 Like many soups and stews that involve cooking joints and bones up, it’s best to cook it the day before, also the pearl barley requires soaking time so keep this all in mind.

Start by rinsing and soaking 4 ounces of pearl barley in water for four hours. Do some light housework in the meantime, or maybe just watch a film in between. Drain the barley and put it in a large saucepan or stockpot. Trim off any excess fat from the meat (keep any big chunks and freeze them and use for Singin’ Hinnies, which I’ll be cooking very soon) and add the chunks to the pot along with 4 pints of water. Bring it to the boil and simmer it gently for an hour before adding the vegetables: 5 ounces of diced carrot, 4 of diced turnip, a stalk of chopped celery, a chopped leek and 5 ounces of chopped onion. Season with salt and pepper at this point too. Let the broth simmer for at least another hour until the meat is falling off the bones. Cut the meat up and return it to the pot and discard the bones. Skim any fat from the soup – this is the point to leave it over night; solidified fat is much easier to remove. Bring back to the boil and correct the seasoning with salt, pepper, sugar and cayenne pepper. Be quite liberal with the sugar and salt. Slice a second leek thinly and add to the broth along with some chopped parsley and turn off the heat; the residual heat will cook the leek. Serve with granary bread and butter.

#103 Mutton and Leek Broth – 6.5/10. A nice soup that needed a lot of seasoning to make it delicious. I really liked the mild mutton flavour and the pearl barley, but expected it to be much more flavourful. That said, because the batch I made was so big I was still eating it three days later and it did get better as time went by.

7/10
i enjoyed this even after being warned that it had excessive pepper input. a light yet hearty stew and the mutton was a good addition to this mix, i have only had mutton a few times myself and enjoyed the slithers of mild meaty flavour. it served me well before working a night shift !

god that sounds good. i wish we could get mutton, and scrag end of neck, in the u.s. here there are only lamb chops.

are you sure purejuice? a quick look on wikipedia tell s me there's an american 'neck' cut:

bat your eyelashes at your butcher and you might get lucky! use lamb, cook for longer and add more seasoning, The Grigson says.