Whilst perusing the little fishmongers in Stockport, me and Charlotte spotted boiling chickens for sale. This is quite weird as I always keep my eye out for them and never see them, but the day before Charlotte requested Mulligatawny soup, but I said that we couldn’t do that, as we need a boiling fowl for it. Perhaps Charlotte is a lucky charm for the English Food project and me. Like some sort of leprechaun or troll.* I’m glad I now have a supply of boiling fowls as quite a few recipes require them. Good oh.

FYI: the word Mulligatawny comes from the Tamil, an Indian language, and means pepper water, and it came here in the Eighteenth Century.

This makes a big old load of soup, enough for 5 or 6 people:

Begin by chopping the boiling chicken into pieces and brown it in 2 ounces of butter, along with a sliced onion. Now add 1 ½ tablespoons of curry powder – either mild, medium or hot (I went for medium, but added a pinch of chilli powder) – and 8 ounces of yoghurt, plus some salt. Fry all this until the yoghurt reduces and becomes a thick crust on the bottom the pan. Be careful not to let it burn though. Add 3 pints of water and let it all come to a simmer. Cook for around an hour and a half until the meat is falling off the bone. Pick the meat off the carcass and chop it up, if need be, retuning it to the pan and chucking out the bones. This is a good point to leave the soup overnight, so any chicken fat can be skimmed off easily. Melt another of butter in a separate small saucepan and add 4 cloves; apparently, the cloves soften after a few minutes if cooked gently and can be crushed with a spoon. This didn’t happen for me. Hey-ho. Add the juice of lemon and pour the butter mixture into the soup. Season with more salt if appropriate. Serve with some boiled rice and some chopped apple sprinkled on top. 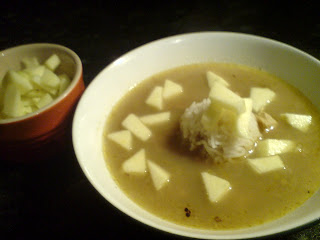 #106 Mulligatawny Soup – 4.5/10. Not a bad soup, but decidedly average. When I first tried I thought it was surprisingly light and refreshing, but then as I tried it again, I decided I wasn’t sure. It sat in the fridge for a bit and I realised I wasn’t going to eat it, so it went off the bin. I think I was disappointed because it wasn’t what I expected. I’ve had Mulligatawny from a tin and was sure it contained some kind of red meat. Flicking through the book, I spotted another soup called Indian Soup, which looks a lot like what I thought Mulligatawny was.

I love Mulligatawny soup- the curry house in Baguley did a scrummy one. I feel your disappointment. Sad Face.

It was very annoying; luckily it was super-cheap so I didn't feel too peed off about it