There has been previous debate and discussion here on Neil Cooks Grigson on the what makes a Chorley cake different from an Eccles cake. It wasn’t really solved, but I thought that an Eccles cake was made with shortcrust pastry and the Chorley was made with puff pastry. It seems that coming in from leftfield to further confuse us is the Banbury cake. Which is what I thought was a Chorley cake. As far as I can see the only difference is maybe that there are more species in it as well as a touch of rum. Does anyone know the differences between the three?

Banbury cakes certainly go way, way back – Griggers found a recipes for them in a book called The English Hus-wife, written in 1615. Hus-wife: what a great word. I’m going to start using it in conversation.

Anyways. In the EEB department of Rice Uiversity we had a Thanksgiving dinner and we were all asked to bring something in for it. These little cakes seemed like the perfect thing to make for a buffet – no need for slicing or even plates. I’m always slightly nervous of making recipes from the book for these kinds of things in case the recipe is God-awful – like previous bad experiences like the Whim-Wham, English Rarebit, the Rice Cake or the Mocha Cake.

First of all, melt two ounces of butter in a saucepan. Remove from the heat and add four ounces of currants (or if you live in America, raisins!), an ounce of candied chopped peel, two ounces of sugar, ½ a teaspoon each of ground allspice and nutmeg as well as ¼ teaspoon of ground cinnamon and a tablespoon of rum. Allow to cool.

While you’re waiting, roll out some puff pastry thinly and cut seven inch wide circles. Put a spoonful in the centre of the circle in line about five inches long, drawing and folding in the pastry, pinching in the edges. Turn them over and flatten them slightly with the rolling-pin so that you have oval shaped cake. Make three slashes over the top, brush with egg white and then sprinkle with sugar. Bake for 15 minutes at 220°C (425°F). Allow to cool on racks. 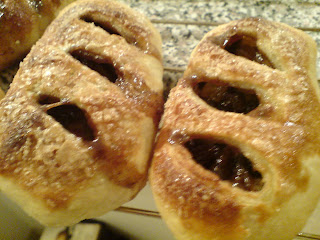 #259 Banbury Cakes. These were very good indeed and they went down well at the thanksgiving dinner which was good, where I got the chance to shamelessly plug the blog. I think I prefer these to the Eccles cakes too, though there isn’t much in it. I scoffed down two as soon as they were cool, which wasn’t good as I was meant to be off wheat at the moment. One thing led to another and I ended up drinking wheat beer and eating a giant pizza in Late Nite Pie. Oh dear. 7.5/10.
Posted by Neil Buttery at 1:57 AM

Thanks for that Jane. It's one those things that although unimportant, seems to have to be solved. I'm too much of geek!

I'm another English cook, though currently resident in Australia. I have an elderly copy of Grigson, but my bible is British Cookery, edited by Lizzie Boyd, for the wonderfully named British Food Information Service of Food from Britain and the British Tourist Authority! Published in 1976, so of the same vintage as Grigson, it was the first ever nationally-consolidated manual for catering students. I found a copy in the University Library in Cambridge in the early 1990s and have been hooked since. It includes recipes for Eccles, Chorley and Banbury cakes, and they are all different. Chorley cakes are made simply of rich shortcrust pastry, currants and icing sugar; Eccles cakes of either shortcrust or puff pastry with currants, butter and brown sugar, brushed with egg white and sprinkled with caster sugar; Banbury cakes are the richest, being of puff pastry with lots of butter, currants, chopped citrus peel, cinnamon and allspice, again brushed and sprinkled.

Since I wrote this article I have completed a course in Patisserie where Eccles cakes were the same as you say, but not rolled very flat. Chorley where the same mixture, shortcrust pastry and rolled really quite flat.

There is no real agreement anywhere on this one, though I think the important different is the type of pastry used.

I agree you on the Banbury cake though!