There was a few dregs of red wine left over the other morning after a few drinkies the previous evening, not something that regularly happens in my house, and this presented me with the opportunity to try this strange recipe. I’ve already done Welsh and Scottish rarebits/rabbits and now I can complete the set. The English rabbit (like the Scottish) was invented in response to the Welsh rabbit. Apparently, this is the best we as a nation could come up with (at least according to Hannah Glasse):

‘Toast a slice of bread brown on both sides, they lay it in a place before the fire, pour a glass of red wine over it, and let it soak the wine up; then cut some cheese very thin, and lay it very thick over the bread, and put it in a tin oven before the fire, and it will be toasted and brown’d presently. Serve it away hot.’ 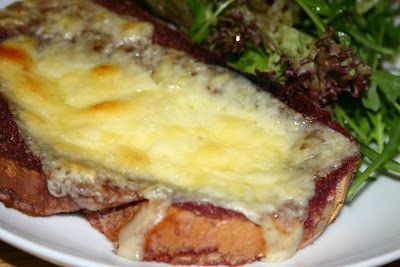 I simply made some toast but it in a ovenproof dish, sprinkled some red wine over it, piled on the slivers of cheese and grilled it. I serve it with a wee salad dressed with olive oil and balsamic vinegar.

#230 English Rabbit (1747). This was without doubt the worst Grigson I have done so far. Even worse than the Mallards of Death and the rice cake. I actually thought I was going to be sick. The hot wine and soggy bread was bizarre. Adding salad really was just like polishing a turd, as we say in England. Absolutely disgusting 0/10.
Posted by Neil Buttery at 6:10 PM

bwahahahahaha! i'm sorry, but i am laughing out loud.

It was so awful. How can anyone think it is even edible never mind delicious!?! Still feel queasy thinking about it!