It’s been a while Grigsoners. I am very busy at the moment – and will be for the next couple of months – writing my PhD thesis, so forgive me if the blog entries become a wee bit thin on the ground. The recipes that I can do are those that don’t require difficult-to-get items or dinner parties so I’m a little limited seeing as I spend most of my time in a library these days.

Anyway, enough of that.

These Welsh griddle (or girdle) cakes seemed by the recipe that they would be absolutely delicious. Indeed girdle cakes must be delicious because there’s a few recipes in the book. However, the last time I cooked some (Singin’ Hinnies) they were pretty awful. Grigson doesn’t give any background on Cacen Gri, though I have noticed that there are lots of Welsh recipes – perhaps more than English ones – in the part of the book devoted to griddle cakes and pancakes. Funny that, because when I think of Welsh specialities, I think of leek pie and rarebits not pancakes. They must be terribly fat as the amount of butter and lard in this is huge!

Start off by sieving a pound of flour and a teaspoon each of baking powder and salt into a bowl. Rub in four ounces each of cubed butter and lard. Mix in three ounces of mixed dried fruit and peel and an egg plus a little milk to form a dough. Leave to rest in the fridge for a little while and then roll out thinly and cut into plate-sized rounds. Grease a large pan with a little lard fry the griddle cakes for just two minutes a side on quite a high heat. Don’t overcook them as they go very dry very quickly. They should puff up a little and gain brown spots. Stack them on a warmed plate, add a good knob of butter between each one, keeping them nice and cosy in a warm oven. I served them with some very un-Welsh maple syrup too. 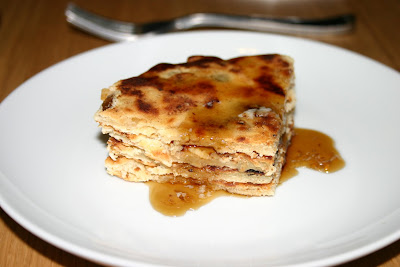 #242 Cacen Gri (Griddle Cakes). I wasn’t sure if I liked these or not. The first batch was over-cooked and all powdery. I soldiered on a tried again though and I think that they were okay. No more than that though. They were still pretty claggy and need lots of butter and syrup. Perhaps that is the secret to these girdle cakes – any amount of flour and fat will taste fine if smothered in enough melted butter and syrup. 5/10.
Posted by Neil Buttery at 1:39 PM