This is a teatime treat that I’ve been wanting to make for ages – Griggers really bigs this one up, as does her daughter Sophie. Singin’ Hinnies hail from the North East of England around Newcastle and are regarded one of the best of the griddle cakes, apparently. Everyone, no matter how rich or poor, ate them at teatime or parties. If you were lucky, you’d find a shiny sixpence inside. Health and Safety would have a field day. Singin’ Hinnies sing because of the fat content – the lard and butter make a rapid sizzling noise. The word ‘hinnie’ is a colloquialism meaning honey, a term of endearment equivalent to luv or duck.

To make the Singin’ Hinnies rub 4 ounces of butter and 4 ounces of lard into a pound of flour that has been sifted along with ¼ teaspoon of bicarbonate of soda, ½ a teaspoon of cream of tartar and half a teaspoon of salt. Stir in 6 ounces of currants (or raisins or sultanas) and finally make a firm dough using a little milk (how firm? I don’t know – but mine rather like pastry). Roll out the dough and cut out into rounds of around 2 ½ inches (how thick? again I don’t know, but I did about ½ an inch). Grease a skillet or griddle pan with some lamb fat tat’s been “speared with a fork”. I happened to have some, but if you don’t, I’m sure you could use lard. Cook the cakes until they pick up brown spots, turn them over and cook the other side. When cooked (how long? I don’t know!), open them up and add a small knob of butter to each one and keep them warm in the oven whilst you cook the rest. 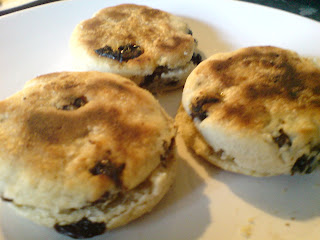 #145 Singin’ Hinnies – 4/10. Disappointed with this one. I’m not sure if it was me making them incorrectly, but they were either too dry due to overcooking or too squidgy and raw tasting the middle. The currants prevented them from being inedible as did the glug of maple syrup I added too!
Posted by Neil Buttery at 4:58 PM

Having become quite excited at previous griddle cakes, these were disappointing (sorry Jane and Sophie). They were a bit like a scone, but not as nice and ultimately too dry for the format they're in. 3/10
Charlotte

Hinnies are best made with all-baking powder and I suspect yours and Charlotte's 'too hard and dry' results come from a too dry dough ... it should be what my mother called 'slack.' :) i.e. soft. We never put dried fruit in them and they were always eaten warm, split, with butter. Give it another go.

Hey Phil. This is always a recipe I have intended to revisit but never seem to get the chance. I'm a much better cook now and have a better feeling for making these sorts of doughs. Next time I have a free day, I'll give them another go and re-blog it on my other blog (British Food: A History).

Thanks also for spotting my typo. It should have read '1/4 tsp bicarbonate soda and 1/2 tsp cream of tartar'. I shall change it.