After the creamy and rich oyster loaves last night, I thought I’d go for something a little bit more fresh-tasting and the Welsh Supper Herrings seemed to fit the bill. I chose herring because, like oysters, I’d never knowingly tried them except, of course, in the form of kippers. Herring are quite cheap as are most of the other ingredients so it didn’t break the bank. The odd ingredient here is the Bramley apple, but apparently it’s a traditional thing, herring and apple. First I’d heard.

Gut, clean, descale, behead and fillet a pound of herring – ask your fishmonger to do this, I tried to fillet them myself and was reasonably successful but was a bit of a ballache. Now mix an ounce of softened butter with a tablespoon of mustard made up from mustard powder (Why? Because Griggers says so, that’s why). Spread the butter over the cut side of the fish fillets and roll them up.

Next get to work on peeling and then finely slicing a pound and a half of firm potatoes – Jane recommends using a mandolin for this. Please, please, please be very careful here – I managed to slice a piece of my thumb off doing this last night so watch out. You have been warned. Don’t go suing me if you open a vein… Plunge the potatoes into boiling salted water for a minute she says – though I would do them for 2 or maybe even three (see below). Then slice a large onion and two Bramley (or other cooking) apples that have been peeled and cored. No need for the mandolin for those. Use a little more softened butter to grease a pie dish and make a layer using half the potatoes, then half the apples and half the onions, seasoning as you go with salt and pepper. Next, the rolled up herring fillets and sprinkle them with half a teaspoon of dried sage (Why not fresh? Because Griggers says so, that’s why). Then add the remaining apple, onion and potato, adding a brief painting on of melted butter to the last layer of spuds. Pour boiling water so it comes around half way up the dish. Bake for around half an hour until the potatoes are cooked. 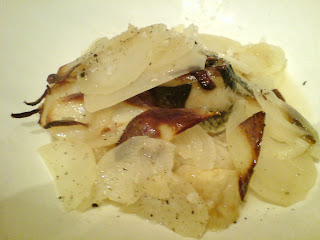 #133 Welsh Supper Herrings – 3.5/10. Not sure if this was a bad dish or a bad recipe for a good dish. The potatoes, apples and onions were very nice – the apples especially lifted it, but the potatoes were not cooked after half an hour even though I blanched them in the boiling water. They were done after an hour, but unfortunately this meant that the herrings had cooked down into a mush not unlike cat food. So pretty disappointing seeing as I almost sacrificed a digit for it. Hey-ho, such is the nature of this undertaking…
Posted by Neil Buttery at 4:17 PM

4/10. Something went wrong here we thinks, the potatoes looked pretty sick, no colour in them at all, poor things and the herrings, although tasty, were a bit musharama and had some annoying little bones in which kept getting stuck in my gappy teeth (no-ones fault but my own genes, but just thought i'd throw it in for you other gappy toothed readers out there).

i am making this with wild-caught salmon goujons i froze after buying a huge slab at $7 a pound at costco (the cheapest warehouse store alive). i like the idea of mustard/butter/sage, and cooked fruit in savory dishes is one of my faves. i'm linking to this on FB, thanks.

If you are wanting some fruit and fish recipe, I would have to recomend the salmon in pastry with a herb sauce. Very good and could easily be adapted to a sauce orf something to go with goujons.

Costco is great. There are places like that in Britain but not on such a scale, natch!