For the last few weeks, I’ve been dreaming about soufflés – I don’t know why but I had a real hankering. I hope I’m not pregnant. Luckily for me Lady Grigson always obliges – there are loads of soufflé recipes in English Food. Obviously the soufflé does not have English roots, but up until recently, they were pretty popular – particularly in the 1970s and 1980s when English Food was written. They do have a bit of a reputation for being tricky little devils – I had only cooked one once before when I was about 10 – I remember it completely sinking, but being delicious.

I like one comment Jane makes about soufflés when they are ready to come out of the oven:
“…it is better to have everyone sat at table. In a properly trained household, the cry of ‘Souffle!’ should have the same effect of assembly as ‘Fire!’”

FYI: the soufflé was invented in the late eighteenth century – around 1782, but the first recipes didn’t not appear until 1813, when several were published in Louis Ude's The French Cook of 1813. The idea being they were cheap as they are essentially just eggs and air with some kind of flavouring so they were a good meal the common man. 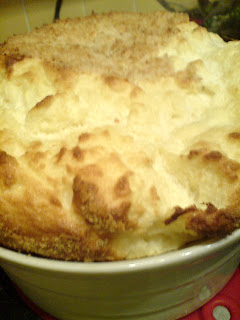 This cheese soufflé feeds between 2 and 4 people depending upon how greedy they are. There’s a couple of stages, but they're pretty straight-forward and not as tricky as people seem to make out:

First of all make sure you have a soufflé dish (or similar) that has a capacity of around 2 ½ pints and grease it with butter, then preheat the oven to 200°C. Next, heat ½ pint of milk to just below boiling point and melt 2 ounces of butter in another (decent-sized) saucepan and add 1 ½ ounces of flour to it. Allow to cook for a minute, take off the heat, and add the boiling milk. Whisk well to form a smooth sauce and then incorporate 4 large egg yolks, one at a time. Mix in 3 ounces of Cheddar (or Lancashire) cheese and season with salt, pepper and Cayenne (which I forgot!). Put back on a low heat and stir until all is nice and smooth. Easy-peasy thus far.

Next, whisk 5 large egg whites together with a pinch of salt until they reach the stiff-peak stage – you should be able to upturn the bowl without any of the contents to fall out. Take a tablespoon of the whites and mix it in to the cheesy sauce to slacken the mixture, then tip in the rest, folding the whites in carefully with a metal spoon until incorporated. You need to do this with minimal stirring, so don’t worry if there’s a few specks of white knocking around. Stir in a tablespoon of grated Parmesan cheese and pour/spoon the mixture into the soufflé dish. Lastly, sprinkle over another tablespoon of Parmesan and a tablespoon of stale breadcrumbs. Bake for 30 minutes – do not on any account open the oven door until the time is up. Serve straight out of the oven with a nice green salad.

#138 Cheese Soufflé – 8.5/10. This was really nice, and definitely English – just like Chicken Tikka Masala become part of our cuisine more recently. The top was very crisp and the centre was just cooked and extremely light. We wolfed it down. Bring on the other ones, I say – but which to do next..? You have to make sure everything is ready – salad dressed, plates laid out etc – otherwise as it does collapse, but I have to say, not that much. All I have to say is – give it a go if you’ve never made one, it’s no way near as tricky as I thought it would be.
Posted by Neil Buttery at 4:48 PM

8/10. I would like the cry of 'Souffle' to be every month. It certainly would have the same effect on me as someone crying 'fire'. Super light and a lovely crispy top. a joy to eat.