The one-hundredth recipe had to be the Roast Turkey really didn’t it? It is the centrepiece of the whole dinner, perhaps the day. I bought us a nice free-range one from Frosts in Chorlton. I’m glad I was allowed to do it, as my Mum always panics about the turkey and over-cooks it by about two hours; in fact, over the last few years, she’s taken to over-cooking it the day before! It took some persuasion for us to cook the bird on the day: “Well I’m not getting up at 6 to put it in!”. Obviously, I didn’t get up at 6. I stuffed the turkey as recommended by Griggers with lemon and parsley stuffing. If your Christmas turkey tuned out to be, well, a bit of a turkey, try it this way next year. One doesn’t like to blow one’s own trumpet, but it was the best Christmas turkey we ever had at home; though it wasn’t really down to me, but to Jane Grigson. 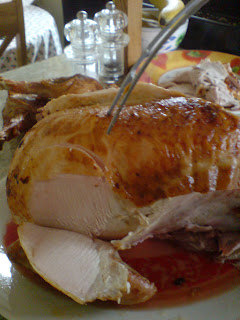 The first thing to do is to remove the giblets and stuff the bird. You can stuff the cavity or the neck end, it doesn’t really matter. Next, calculate the cooking time of the turkey: 30 minutes per kilo if it’s below 7 kilos (15 lbs). If you are cooking a monster, add an extra 20 minutes per kilo after that. You must include the weight of any stuffing you’ve used too. Put the turkey on its side on a rack in a roasting pan and smear it all over with 6 ounces of slightly salted butter. Cover with a double layer of foil and cook at 190ºC for the appropriate time. Just under halfway through the cooking time, turn the bird onto its other side, and then in the final half an hour, put it on its back and remove the foil so it can brown nicely. Season with salt and pepper. Baste it a few times, if you like. Allow to sit for at least 20 minutes before you carve it. In fact, we left it for about an hour and it was still juicy and hot, so don’t feel you have to rush or anything. Skim off the fat from the juices in the pan, then make your gravy by boiling up the juices with a quarter of a pint of dry white wine and thicken with flour or gravy browning. Add enough hot vegetable stock to achieve the right thickness.

#100 Roast Turkey - 9.5/10. I love Christmas dinner, so I’m really glad that I did the turkey for the 100th recipe. This is a foolproof methods for doing your Christmas/Thanksgiving bird; succulent, tasty, not in the slightest dry. Bloody marvellous.
Posted by Neil Buttery at 1:57 PM

god bless us every one!!!
the stuffing sounds superb, and i've roasted a chicken this way. why it never occurred to me to do a turkey like that is beyond me. i'm delighted to think it worked to make your mother's day and your family's delicious.

I can't believe how easy the recipe. Some others are so unbelievably complicated!