Here’s a raised pie that is versatile – you can use chicken, rabbit or any other game as its base. I went with game as I love cooking with it and love eating it even more. I’m giving you it just in time for the end of Britain’s game season. I would advise you go out and get some pheasant and pigeon right know – this was so good I have been making them in huge amounts for the market stall.
You can make pies of all sizes here – one massive one or many tiny ones. It’s up to you – look at the #282 Raised Pies post for more details on cooking methods. That post also goes through how to make the hot water pastry. If you want to make your own jellied stock, have a look at this post here.
For the filling, start by removing one pound of meat from the bones of your chosen game, rabbit or chicken and cut it into nice pieces. Keep any trimmings and bones. 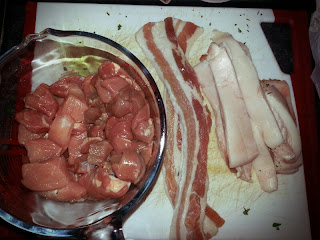 Next, mince together 8 ounces of hard pork back fat (or fatback in America), 12 ounces of lean pork, 8 ounces of lean veal as well as any of the game, rabbit or chicken trimmings. You’ll also need 8 ounces of thinly sliced streaky bacon (unsmoked preferably); you use it to line the pie, but before all that, you’ll need to take 2 of the rashers and mince them. Mix all the meats together well – the most effective way to do this is to squeeze and squidge it through your fingers – incorporating 3 tablespoons of brandy or Madeira or 5 tablespoons of dry white wine as well as a good seasoning of salt and pepper as well as nutmeg, cinnamon and cloves plus a heaped tablespoon of chopped parsley. 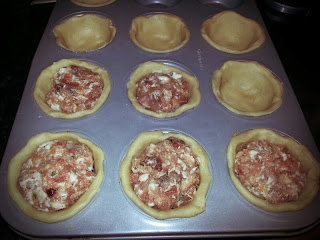 Once you have made your raised crust – I did these ones in muffin tins and there was enough meat for just a shade under 40 pies! – line the pastry with the remaining bacon. Lid them and bake for the appropriate amount of time, my little ones took 35 minutes at 200⁰C (400⁰F). See this post here on how to make and bake a raised pie.
When cooked, pour in the jellied stock as normal (see this post here for help with that). Use the bones from your chosen star meat to make the stock.
Would you believe I forgot to take a picture of the finished product. What a plank I am.
#369 Game, Chicken or Rabbit Pie. As mentioned in my little introduction this pie was amazing, and by far the best of the raised pies so far; the pork and veal prevented the game flavours from becoming dominant, and the warming spices really gave the pie a taste and aroma air of old-fashioned England. I must try this pie with chicken and rabbit soon. I hope it is as good without the game! 10/10.
Posted by Neil Buttery at 9:01 PM