The griddle (or girdle) cakes in this book have been a bit mystery to me in that there are a fair few, so they’re obviously greatly-loved, yet they have all been rather dry, often with the raw taste of flour and more like a bit of cooked, badly-made, pastry. The problem is, I don’t really know what they should be like in consistency as I have never eaten one outside of Neil Cooks Grigson, and there is often little guidance from Jane as to how much liquid goes in. This time I am going to add more liquid so that it is more like a biscuit dough to see if this makes a difference.

Pice ar y Maen are traditionally made on St David’s day in Wales, but like the pancakes made on Shrove Tuesday, they’re made all year round too. Apart from the inclusion of the spice mace in the recipe, it’s made up of ingredients that are likely to be in the store cupboard. 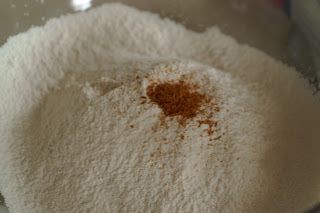 Next rub in with fingers, pastry blender, mixer or processor 4 ounces each of butter and lard. Stir in 4 ounces of raisins or currants and 6 ounces of sugar. Now beat in 2 eggs along with a little milk. You need a dough that is soft, but not so much that it falls apart and sticks to the rolling pin and worktop. I prefer to be generous with the liquids. 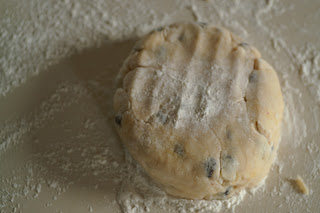 Strew plenty of flour and roll out thinly – if the dough is too sticky to do this easily, knead in some more flour. Cut out into dinner plate-sized rounds, though I think a 3 inch diameter round works best as they are easier to turn.

Heat a little bit of lard in a heavy-bottomed pan, cook for about 3 minutes per side.

Rather than serving with butter and syrup, Griggers says you should turn them in the extra sugar. 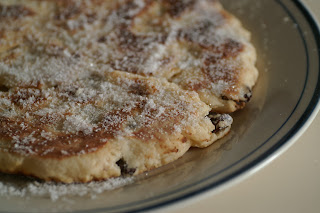 #346 Pice ar y Maen (Welsh Cakes on the Stone). Well I have to say that these have been the best of the griddle/girdle cakes so far – the other ones have been dry (though I think this difference is due to the fact  I have become a better cook).  They were light and a little stodgy – in a good way – they were certainly sweet enough and they sent the delicious aroma of mace into my kitchen as they cooked. Very good, though I did have to add a little butter, I must admit. On the strength of this, I think I need to revisit the other girdle cakes. Very good 8/10.
Posted by Neil Buttery at 11:43 PM