#328 Salmon in Pastry, with a Herb Sauce

This is a recipe that is inspired by the medieval love of combining fish and candied sweetmeats. Griggers says it is a ‘brave, but entirely successful blend’. We’ll see. Large medieval banquets had to contain dishes with lots of spice; after all how else could you display your vast wealth other than to use that new and exciting new spice, sugar? When first brought to Europe from India, sugar was considered a spice like any other and therefore medicinal. It lost its rank as a spice once it gained popularity as a more general addition to the dinner table; albeit a giant banqueting table. 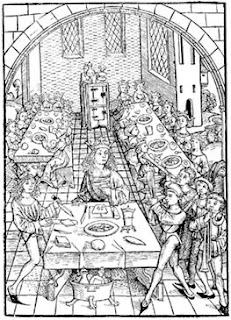 The addition of the salmon, then, you might feel was also a mark of an ostentatious medieval lord. It is not the case, back in the day, before such things as pollution and overfishing, streams were teeming with fish like salmon. In fact they were so common on the River Mersey that people used to feed them to their pigs! The same, of course, goes for oysters too, and yet we can now buy a pound of sugar for 30 pence. How times have changed.
This dish is very attractive: a nice piece of fish wrapped in pastry with some spices and a nice piquant herb sauce containing some lesser used herbs, and it’s pretty easy to make to boot.
Ask the fishmonger for a 2 ½ pound tail piece of salmon and ask him or her to bone it. If you like, ask them to take off the skin (though I have never seen the point of this). If there isn’t a tail in a single piece, get two filleted tail ends of approximately equal size. 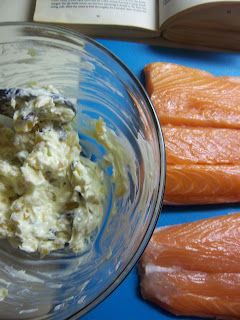 To make the sweet and spicy filling, beat 4 ounces of softened butter with 4 knobs of preserved ginger that have been chopped, a heaped tablespoon of raisins and  a rounded tablespoon of chopped, blanched almonds. Use half of the mixture to sandwich the two pieces of salmon together and then spread the remaining half over the top piece. Season with salt and pepper. 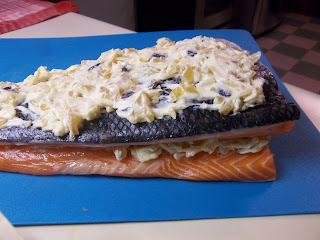 Now you are ready to encase the beast in pastry. Jane suggests using a shortcrust pastry made with 8 ounces of flour and 4 of fat, but I needed a lot more: I used a batch made of 14 ounces of flour and 7 of fat! I must have got a very large 2 ½ pound piece of salmon… Roll out a third of the pastry into a shape larger than the fish and place it on top. Next, roll out the rest and carefully place it over the fish, gluing it together with some beaten egg before trimming the edges and glazing the whole thing. Use the trimmings to 'make a restrained decoration on top. There were a few small cracks in my pastry, but I hid them most cleverly with some pastry leaves that I placed here and there. I must say, I was quite impressed with my effort. Make 2 or 3 slashes on the top so that steam can escape and bake it for 30 to 35 minutes at 220⁰C (425⁰F). 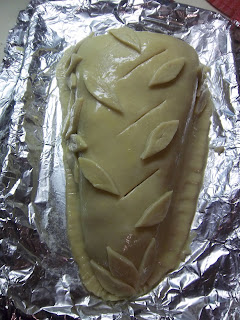 Whilst the salmon cooks, you can get on with the sauce. Gently fry 2 chopped shallots, a heaped teaspoon of chopped parsley and a teaspoon of mixed chopped tarragon and chervil in 2 ounces of butter. When the shallots have softened, stir in a teaspoon of flour, then ½ pint of single cream (or half single-half double; American readers: heavy whipping cream is the thing to use here). Simmer for around 10 minutes, then season with salt and pepper and a teaspoon of Dijon mustard. Whisk 2 egg yolks with a couple more tablespoons of cream, turn down the heat in the pan and pour in. The sauce will thicken as the yolks start to cook – do not let the sauce boil, or your yolks will scramble. Finally, lift the whole thing by adding a good squeeze of lemon juice.


‘Place the salmon in its pastry on a hot dish; serve with the sauce in a separate sauceboat.’ 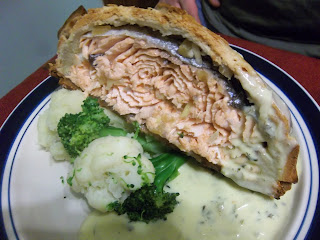 #328 Salmon in Pastry, with a Herb Sauce. Another winner from Grigson; the medieval folk of England obviously knew what they were doing, and obviously weren’t all style, no substance. The salmon remained nice and moist and was perfectly cooked and really was complemented by its very sweet and slightly spiced butter basting. My only complaint would be that there wasn’t enough of the filling; I would have added at least an extra half again of the ginger and raisins. The sauce was excellent – creamy, yet light – tarragon and chervil are really delicious herbs that don’t get featured enough. This applies to chervil particularly, which seems to be in season at the moment as it’s cropping all over the place at the minute. A very good dish this one that could be made excellent with some minor changes. 8/10.
Posted by Neil Buttery at 4:07 AM