This is an old recipe made up of sweetbreads, bacon and mushrooms grilled on skewers. Indeed, the work skuet is a corruption of the word skewer. The recipe first pops up in the literature in The Compleat Housewife by E Smith (a Lady) first published in 1729. Here’s her recipe from the 1753 edition:

Take fine, long, and slender skewers; then cut veal sweet-breads into pieces like dice, and some fine bacon into thin square bits; so season them with forc’d-meat, and then spit them on the skewers, a bit of sweet-bread, and a bit of bacon, till all is on; roast them, and lay them round a fricasy of sheep’s-tongues.

Chef to kings: Antoine Carême
Forced meat is simply meat mixed with other ingredients to ‘force’ it to go further. I made forcemeat balls a while back (click here for the post). The recipe given here is a jazzed-up version from French chef Antoine Carême’s 1833 book L’art de la cuisine franҫaise au dix-neuvième siècle. According to Grigson, he praises it as an excellent English dish. Jane suspects he found out about it when he lived and worked in London as the Prince Regent’s chef. The changes he made were simple: lose the forcemeat, add some nice mushrooms and serve with bread sauce (see here for recipe) as well as some crunchy browned breadcrumbs.


Sweetbreads are not the easiest of cuts to get hold of these days: I remember speaking to a butcher in Houston who said he came by them sometimes, but if I wanted some, I would have to buy a whole ten pound tray. I was tempted but declined. What if I didn’t like them? Well I am glad I didn’t because I spotted a pack of frozen calves’ sweetbreads in Whole Foods whilst buying some other bits and bobs. I do love that shop.
For those that are not aware, sweetbreads are a type of offal and come from the thyroid gland, situated around the throat, of either calves or lambs. The thyroid, or thymus, gland produces the hormone thyroxin which is involved in the proper regulation of metabolism. Hyperthyroidism is a common disease where the sufferer produces too much, causing very high metabolism and, as a consequence, is rather skinny. I had a cat with it once. Other glandular organs are also sold as sweetbreads such as the pancreas, the sublingual glands of the tongue, the parotid gland of the cheek and also the testicles, though ‘throat’ sweetbreads are by far the commonest. Why are they called sweetbreads? Well, they are sweet because they taste richer and sweeter compared to meat, and they are bread because the old English word for flesh is bræd. I assume the bread that we get in loaves carries the name it does because Jesus said bread was his flesh during the Last Supper (I’m surprised he didn’t put anyone off). 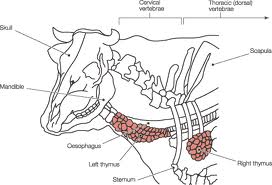 Diagram showing the position of the thyroid, or thymus, glands

Sweetbreads were once very, very popular, but have now died a death. Though, like many of the old forgotten cuts of meat, there is a slight resurgence. I had never eaten them, but certainly wasn’t nervous about eating a big gland; I just always worry that the reason people don’t choose to eat them anymore is because they taste bad.


This recipe makes enough for four people:
Begin by preparing a pound of veal or lamb sweetbreads. To do this, dissolve a tablespoon of salt in some water and soak them for around an hour. Rinse them, place in a saucepan and cover with chicken or veal stock and mix in a couple of teaspoons of either lemon juice or wine vinegar. Bring to a boil and allow them to simmer until they go from pale pink to a whitish opaqueness. 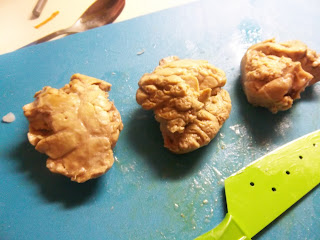 In the case of veal sweetbreads, this took about 15 minutes. Remove the sweetbreads and allow to cool a little before removing any membranes or gristly bits. You must be careful here – Jane makes a point of mentioning this and she was right – don’t let too much of the sweetbread come away with the membranes. If using lamb sweetbreads, be extra careful, as you’ll end up with nothing! Press the sweetbreads by pressing a plate on them until they cool.

Turn the grill on to a medium heat. Whilst it warms up you can construct your skuets: cut the sweetbreads into chunks – 12 good sized cubes is best – cut around 8 rashers of streaky bacon to square shapes and brush any dirt from 16 medium-sized mushrooms. Take a skewer and add a mushroom, some bacon, a piece of sweetbread, a bit of bacon, a mushroom etc. I used four mushrooms and three pieces of sweetbread per skewer each separated with some bacon. Make four skuets in all. 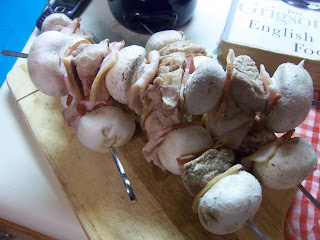 Brush them with melted butter and grill them, turning occasionally for about 15 minutes. Whilst they are cooking, fry some breadcrumbs in butter until brown and crisp.

Serve with some of the browned crumbs and bread sauce as well as some nice vegetables.
#317 Skuets. What a revelation these turned out to be. A really good meal and the sweetbreads were by no means gross. They were very tender and sweet, and tasted faintly of oysters. I put this down to the fact there must be a lot of iodine in sweetbreads as it is required for them to function properly. The salty bacon and the juicy grilled mushrooms complemented it very well. The crumbs lent a nice bit of crunch and bread sauce is always welcome in my book. All-in-all a very good meal. 8.5/10
Posted by Neil Buttery at 4:07 AM