This recipe is the very first one that appears in English Food. Although it may seem rather odd nowadays, it is one of the most historical recipes there is. Almond soup, or almond milk as it was originally called goes right back to the Middle Ages. It was made with almonds, onions, wine and spices. More recently, it diverged into two completely separate dishes: almond soup and blancmange.

Griggers reckons that one of the reasons (apart from it tasting good) that it’s remained popular is because the ingredients are easy to come by; most being found about the house. Well, it is popular no longer – I’d heard of it, but only vaguely. Not all the ingredients are easy to come by these days either – the main reason I’ve only got round to making this now is that I managed to finally get hold of the veal knuckle required for the stock.

I always really enjoy making these sorts of recipes in the book – I don’t even mind if they’re not that nice – it’s just interesting cooking and tasting these old, old recipes. I’ve said it before, but it is great that such books like English Food exist, it’s also great to see that many of these unfashionably historical recipes are tasty and interesting. Does this one fit into that category though..? 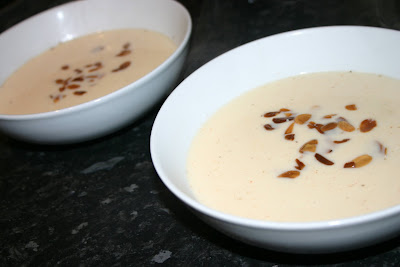 To make the soup, you need to start the day before and get on with the task of stock-making. Start off by placing a small gammon hock (I made one myself in the brine tub!) and a good meaty veal knuckle that has been cut into three pieces in a large pan or stockpot. Add four pints of cold water and slowly bring to the boil; the slower you do this, the clearer the stock will be. When it does come to the boil, skim away any scum and add a quartered onion, a quartered carrot, four chopped celery sticks, a teaspoon of lightly-crushed peppercorns, two blades of mace, a bay leaf and a tablespoon – no, I didn’t misread the book, tablespoon – of salt. Bring back to the boil and then turn the heat right down so that the stock simmers gently away for four hours. Strain and chill overnight and skim the fat off the top. Bring back to the boil and reduce the stock until there is around 2 ½ pints remaining. Alternatively, if you simply cannot be arsed with all of that, use a light beef stock!

For the soup, place 2 ounces of blanched almonds and an ounce of white bread (crusts removed) into a blender along with a couple of ladlefuls of stock and liquidise the lot. Push the gloop through a sieve into the reduced stock. Turn the heat off under the pan. Next, beat an egg yolk into ¼ each of double cream and soured cream and whisk it into the soup, reheat, making sure the stock is not boiling, to prevent the egg from cooking and curdling. Now season with white pepper, salt (!), Cayenne pepper and lemon juice. Serve with fried croutons or fried almonds.

#194 Almond Soup (White Soup). Certainly not one for those on a low salt or low fat diet. It was very salty and rich. I assume that the tablespoon of salt listed in the ingredients is a typo since a ham hock is also used for the stock. I’m not convinced that I actually liked this soup, it was certainly nicer the next day when the flavours had time to develop. It’s certainly a posh soup, but I think it could’ve been improved by using a less salty stock. Perhaps after all this time-biding, it would have been better if I’d simply used a light beef stock as suggested in the recipe. 4.5/10.
Posted by Neil Buttery at 6:56 PM