The Roast Pheasant was obviously the star of the meal – not just because it is a meat we don’t eat enough of, but also from my point of view because to tick it off I had to do lots of accompanying dishes, so some organisation was required. If you want to have a go, you can have as many of the elements as you wish, though try to do as many as possible as they do go so very well together as a dish. The trickiest part was getting hold of pheasant giblets – however, the nice game butcher at the Farmers’ Market got me them when I asked. Make a point of ordering them as they are routinely thrown away. So, the roast pheasant is made up of five individual parts:

1. The pheasants themselves
2. The game chips
3. The giblet gravy
4. The browned crumbs
5. The bread sauce (dealt with separately as #123). 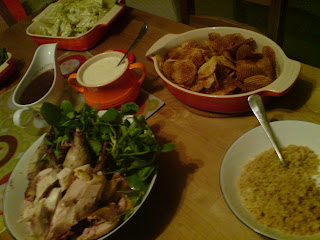 Most of this can be made in advance and reheated, that which is not, is easy and quick to prepare and will not keep you from your guests for very long.

To prepare the brace of pheasants, begin by removing the giblets and setting them aside for later on. Stuff each bird with 2 ounces of butter, plus the liver (make sure you remove the green bitter gall bladder) and a good seasoning with salt and pepper, then lay a thin sheet of back pork fat over them that is large enough to cover the beasts and legs. Secure the back fat by tying string around the pheasants. Place them in a roasting tin and set aside for when you want to roast them – they should be roasted at 190°C for 20 minutes per pound plus an extra 10 minutes. You calculate this for the heaviest bird; in my case 2 pounds, so 50 minutes in all. For the final 10 minutes of cooking, remove the back fat and dust the breasts lightly with seasoned flour. Remove from the oven and allow to rest. I did this just before the guests arrived so that the birds could rest as the leek tarts were cooking. To serve it, I removed the legs, then sliced the breast meat and placed on a bed of watercress.

When the birds were prepared, I started on the gravy: first place the giblets (minus livers) in a saucepan along with a sliced carrot, a sliced onion and a bouquet garni and enough light beef stock to cover everything generously. This was simmered gently for two hours before being finished off later (see below). Next job was to get the game chips sorted. Game chips are basically crisps cut very thinly on a Chinese mandolin using the ridged blade to produce a lattice, or gaufrette, pattern. Peel 1 ½ pounds of firm potatoes. Put the mandolin at its thinnest setting and slice downwards, turning the potato a quarter-turn as you bring it back up to make the next slice to get the lattice effect. Put the chips into a large bowl of water to remove starch and then dry thoroughly. Deep fry in batches at 200°C until golden brown, and drain on kitchen paper and salt them well. This can be re-heated in the oven whenever you need to use them. 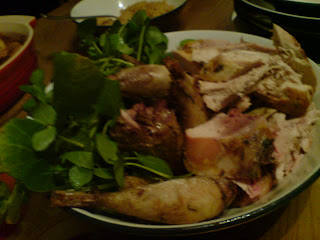 Once the starters had been eaten, I put the game chips in the oven and got to work on the buttered crumbs and rest of the giblet gravy. For the crumbs, 3 ounces of stale white breadcrumbs were fried gently for 5 or 10 minutes in 1 ½ ounces of butter until golden. They were placed in a serving dish and kept warm with the game chips. For the gravy, the stock with all the lovely the giblet flavours poured into the roasting tin. The stock was boiled hard and all the nice sticky bits that were found on the bottom of the pan were scraped off. When reduced, a glass of port was added, there was a quick seasoning, and the gravy was strained into a sauce boat.

So that there was a bit of green, also served some peas and green peas, but also Bread Sauce (as instructed) and (#124) Creamed Celery – Grigson says that either celery or mushrooms should be eaten with roast pheasant.

#122 Roast Pheasant – 9.5/10. What a brilliant meal! It was well worth the effort, I cannot fault it in any way really, and will definitely make it again, though maybe not with all the required elements. The pheasant was juicy and just-cooked, the gravy was beautifully rich and luscious, the breadcrumbs provided a nice crunchy texture and the game chips were tasty, some crunchy and some soggy in the gravy and bread sauce. For me, pheasant is the king of the game birds, and after this, it is going to be very difficult to knock it off the top spot.

FYI: to be a bit thrifty, I made soup from the carcasses and left over veg and trimmed celery etc and it was lovely – I’ll put a recipe up for it. I am never chucking out a carcass again!
Posted by Neil Buttery at 5:05 PM

9/10. I really enjoyed this, even to the point of stripping the carcass in a Neanderthal stylee at the end of the meal. Pheasant was delicious, it was my first time eating the bird and would heartily recommend it, tasty and juicy. The giblet gravy was a joy to eat, so rich and lovely and the game chips finished it all off nicely with a bit of crunch.

8/10
yum, yum, yum, much nicer than chicken, much more flavour, the chips were brilliant, i wanted more though!!
Gravy was delicious, richand very satisfying.
Still cant get over the number of bones in the legs though.
Paddy

Your roast pheasant sounded ace but there's always room for experimentation. The recipe below looks good too:
http://www.guardian.co.uk/lifeandstyle/wordofmouth/2009/dec/29/pheasant-game-recipe-henry-harris