My favourite soup; at least when it comes to tinned Heinz variety. I have made it before, but it was quite an elaborate recipe with loads of ingredients. This one is more basic. It is very tasty, but heed Jane’s advice: don’t buy a skinny little oxtail. I asked for the biggest one they had. However, if you are not reasonably surprised by the size of your butcher’s oxtail, err on the side of caution and buy two. I didn’t do that, and so the flavour was perhaps not as rich as it could have been. It was remedied however, by adding some of that beef stock concentrate, but I did feel like a bit of a cheat! Ask the butcher to chop up the tail and trim the fat off.

I got the oxtails from W H Frost in Chorlton – a very good butcher. I chatted to the man briefly and he mentioned that he could pretty much get anything I want in as long as I order it in plenty of time. Good man! The butcher in Levenshulme is good for the basics, but it’s nice to see there’s somewhere I can get the weird and (not so) wonderful stuff.

I would recommend to giving it a try. If you’re not used to strange cuts or offal, then this is the place to start. It’s not particularly gory and the meat is pleasantly beefy. However, you need to start it the day before you want to eat it. 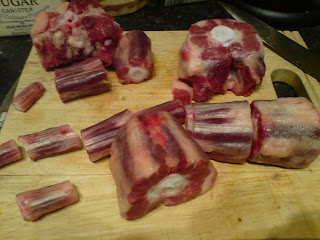 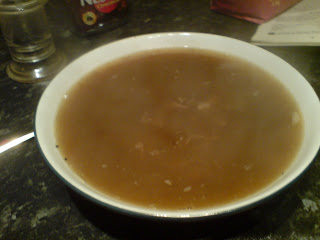 The day before:
Start off by removing any surplus fat from the tail that the butcher didn’t quite get rid of. Chop three stalks of celery, stud an onion with three cloves and slice a small turnip and a carrot. Next, melt 2 ounces of butter in a large pan and brown the meat and vegetables. This takes about 10 minutes as there’s quite a lot of stuff in the pan. Don’t be coy; have the heat quite high, as you don’t want the vegetables to stew. Give a stir now and again. Meanwhile make a bouquet garni – I used 2 bay leaves, a sprig of thyme some parsley stalk (all fresh, but kept in the freezer). When sufficiently browned, add the bouquet along with 4 pints of water and a teaspoon of peppercorns and season with salt. Bring to the boil, cover and simmer gently until the meat is coming away from the bones. This took around four hours. Strain the beefy stock you have created into a bowl and allow to cool. You can discard the veg, but I ate them! The final job is to pick the meat from the bones and plop the meaty chunks back into the soup. Refrigerate the soup over night.

On the day:
Much easier! You’ve done the hard work. Using a spoon, skim off the fat that has risen to the surface and solidified. Reheat the soup to simmering point and add 5 tablespoons of port. This makes all the difference. Don’t dare miss it out. Check the seasoning, you can be pretty bold I reckon. If it is not beefy enough, cheat as I did and add a small amount of stock concentrate.

#80 Oxtail Soup – 7.5/10. Even though I cheated, it is still a beautiful soup. The simple combination of a well-flavoured stock, chunky beef and the sweet port wine is addictive!
Posted by Neil Buttery at 9:53 PM