The third and final soup I made for my recovery. I love the peppery taste of watercress and certainly don’t eat it enough. I thought that watercress soup would be a bit bland, but it is not. Don’t freeze it though, it goes a bit weird. I had mine at work and it didn't look too appetising (see pic), it does look (and taste) better freshly made. It’s another easy soup, especially if you have a blender, though everything can be run through a vegetable mill or ricer. Chicken stock is probably best, though Grigson says you can use water, but vegetable stack is probably better, I reckon.

FYI: Watercress is one of only three indigenous vegetables we have in Britain (the other two are samphire and kale). It's strange how none of them are regularly eaten. 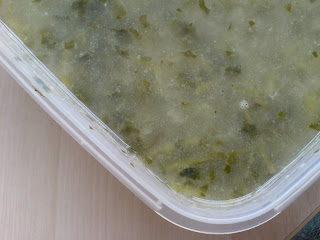 Freezing your watercress soup results in something that resembles pond water - beware!

Start off by dicing a pound of potatoes and slicing an onion. Soften these in a covered saucepan in a little water until soft – keep an eye on it, as you will have to top it up a couple of times. Measure out 2 ½ pints of chicken stock before attempting to blend the potatoes as you may need to some of it to add. Add the liquidised potatoes along with the rest of the stock to the pan and reheat without boiling. Chop 2 small bunches of watercress and stew them in butter for around minutes and add them to the soup. Season with salt, pepper and nutmeg and add two tablespoons of cream to enrich it.

#69 Watercress Soup: 5/10. OK, but I prefer watercress as a salad leaf I think. It has a nice texture to it and the pepperiness does come through, though is hampered by the fact it is cooked.